You can find out about our history on this website.

HS2 has advised the parish council that Banbury Road between Bulls Lane and the Magpie road junction will be fully closed during the construction period until 'early 2024'. It is currently unclear when this will start but it appears that it will be when the proposed 'Greatworth Tee' road junction has been constructed. The latter junction will be a temporary new road linking the compound at the Magpie junction to the B4525, near to Greatworth Park, thereby facilitating the closure of Sulgrave Road from the compound to the Marston crossroads on the B4525. Roundabouts will be formed at junctions with the B4525.

HS2 drop-in sessions are occasionally held to enable affected parishes to discuss issues with HS2 representatives. The venue, dates and times for local sessions will be shown in the events section on the Home page of this website.

Banbury Lane may be closed for through traffic at Lower Thorpe for up to two years during the construction period.

HS2 is constructing the Magpie Works Compound between Banbury Road and the Sulgrave Road near to where the model airplane club operated. It will provide offices and parking for up to 150-200 vehicles. An additional problem is that HS2 are now designating this site for a concrete batch plant, preparing concrete for use along the route. It will give an industrial feel to the location and the site will be illuminated throughout the night.

Construction traffic is a major concern. HS2 propose to route HGV construction traffic along the B4525 turning into Sulgrave Road to the material works compound mentioned above. Other vehicles will be able to access the compound from other directions. The sole access to the compound will on the Sulgrave Road as it approaches the Magpie road junction. The traffic route map below was provided by HS2 in October 2020.

The Parish Council petitioned against the HS2 Hybrid Bill requesting noise and construction traffic mitigation. In January 2015 HS2 offered an Assurance to remove large construction traffic going through the village centre with the exception of the creation of the satellite work compound and a balancing pond in Lower Thorpe; a cross country haul route is proposed.

HS2 issued updated construction traffic projections in December 2020. The peak HS2 traffic period for the B4525 is 18 months from early 2022 when the peak daily average HS2 traffic is projected at 500 HGVs and 1000 other vehicles per day in addition to normal traffic. See the News item on 14 December 2020 for more information.

HS2 has a locally focused website for our area: www.hs2innorthants.co.uk 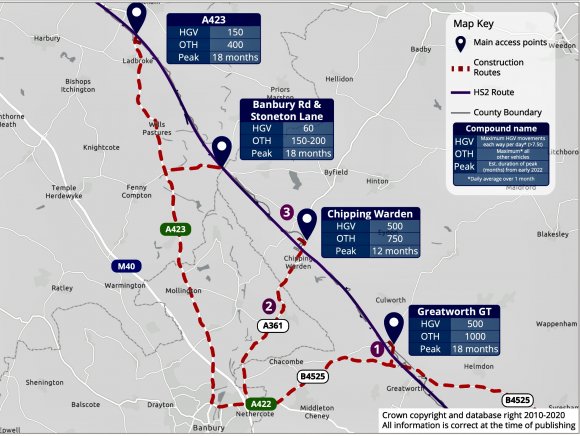 Other major concerns being considered by the HS2 Liaison Group meeting, mentioned above, are the design of power gantries and viaducts. The meeting is endeavouring to monitor and influence the position. The design of the viaduct in Lower Thorpe is regarded as a Key Design Element and details were issued online on 19 October 2020.

Above: HS2 opposition sign at The Three Conies Inn, 2010, before the HS2 Bill received Royal Assent.