You can find out about our history on this website. 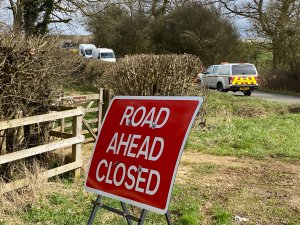 HS2 has recently advised the parish council that Banbury Road between Bulls Lane and the Magpie road junction will be fully closed during the construction period until 'early 2024'.
It is currently unclear when this will start but it appears that it will be when the proposed 'Greatworth T' road junction has been constructed. The latter junction will be a temporary new road linking the compound at the Magpie junction to the B4525, near to Greatworth Park, thereby facilitating the closure of Sulgrave Road from the compound to the Marston crossroads on the B4525. Roundabouts will be formed at junctions with the B4525.
The parish council has expressed various resultant concerns to both the highways authority and HS2, with particular reference to the usage of Banbury Lane through Lower Thorpe and the village. Numerous other concerns arise and the council will continue to pursue steps to alleviate the position.
HS2 has explained that the road closure has resulted from a change in the HS2 construction traffic route. Originally substantial construction traffic was to be routed along Banbury Road going past the village by the Three Conies. This necessitated the construction of a temporary road on the Bulls Lane/Magpie section whilst a cutting was formed and then reinstating the road with a new over-bridge. It has subsequently been decided to re-route the HS2 construction traffic to and from the Magpie compound eastwards to the B4525. The road closure removes the necessity to build a temporary road on Banbury Road. Also, the closure takes traffic away from the right-hand turn off the Banbury Road, at the the speed camera junction, onto the B4525 which will be busy with HS2 traffic. HS2 traffic is anticipated to peak at 1,500 daily movements on the B4525 Banbury route.